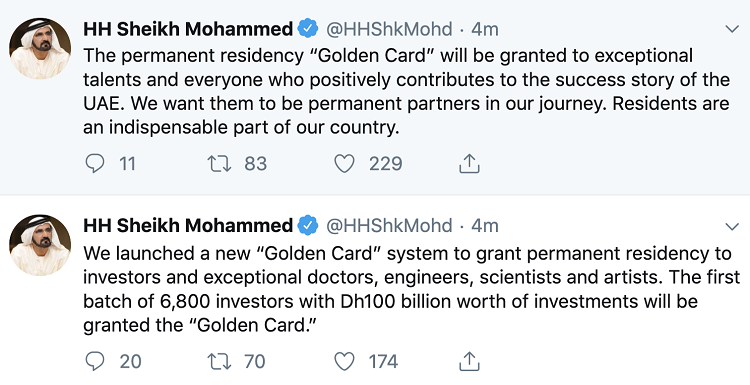 The move will see permanent residency granted to ‘exceptional’ professionals, Sheikh Mohammed bin Rashid Al Maktoum said on Twitter. He said about 6,800 individuals will benefit from the scheme under the first round of applications.

Typically, foreign residents have renewable visas that are valid for two or three years and often tied to their employment. But last year the government announced plans to reform its visa policies. It pledged to allow five and 10-year visas for sought-after professionals, academics and for long-term investors. The permanent residency program set out on Tuesday goes a step beyond this.
Many countries offer forms of permanent residency. Among them is the Green Card system in the US, issued to priority workers, relatives of residents and $1 million-plus (Dh3.6m) investors. Portugal’s Golden Visa is given to those investing in property, setting up a business or creating jobs.

The new permanent visa, introduced by UAE, is aimed at those who bring significant investment to the country, especially that which brings top-quality jobs to the region such as engineers, scientists, and technologists. 6,800 of these cards will be handed out to investors – the combined value of that total investment will be AED100 billion.
With this initiative of the UAE government, the property market will benefit hugely in strengthening the economy. Many are also considering this as a Ramadan blessing, a golden gift to all those who have contributed positively to developing this great country.

Hence we, at Vincitore Group, celebrate this announcement of the Government and invite investors from across the world to invest in our royal and luxurious Real Estate Projects – in the heart of Dubai.

This site uses Akismet to reduce spam. Learn how your comment data is processed.